News: A STEP IN THE RIGHT DIRECTION…A BLOG FROM ‘THE CARAVEN CHRONICLES’

A STEP IN THE RIGHT DIRECTION…A BLOG FROM ‘THE CARAVAN CHRONICLES’ Ranger Amarok rear T step.

Simon Barlow of the Caravan Chronicles reviews the Pegasus 4×4 Ranger and Amarok rear T Step. Please scroll down for the text or follow the link for the full review including technical images and a video.

3rd June 2017 – OK, so if you read about the bike rack install I guess you might have seen the video of me getting onto the tailgate of the VW Amarok…. akin to a whale wearing a tutu and trying to get on points. I needed something better… well, my knees were telling me I better do something about it at least. In the USA, the land of the pickup or Australia the home of the Ute there were plenty of options. The downside was the Amarok has not been released in the USA and shipping charges from Australia are insane. I had to find something closer to home. Doing the usual google searches always ended up with products on sale in different continents so I ended up searching for images that contained the word ‘tailgate’, ‘step’ and ‘Amarok’ and after clicking on various pictures discovered Pegasus 4 x 4 in Bristol. (Note to all the companies out there… spending time correctly tagging and key wording all the photos on your websites pays off!)
I pinged off an email to Pegasus enquiring about the step and how it was fitted. I sent them details of my Amarok and waited for a reply. A great chap called Andrew emailed me back with some details and said, unfortunately, it can’t be fitted to an Amarok with a tow bracket. Hmm… I had seen some pictures of Australian Amarok’s fitted with steps, time for a bit of research. Long story short, emails and pictures were exchanged with Andrew who was very helpful and we came to the conclusion if the Amarok has the tow bumper option it can be fitted.
A few days later a box arrived.

Unboxing, everything was very well packed and included everything to complete the install.

The step came in three sections. The tread plate, the drop down mechanism and the attachment bracket that was unique for each vehicle. (Pegasus 4 x 4 can supply T-Steps for VW, Ford, Toyota, Mitsubishi, Nissan & Isuzu).

The step is fitted on the rear passenger side just to the left of my auxiliary reversing light. Fitting the unit seemed straightforward on the Amarok. The bracket used one of the chassis truck body mounting points and picked up on an existing hole in the rear spring mounting point.
The two white arrows show the mounting points, the red arrow shows one of the bolts that attach the tow bumper to the chassis. If you have a standard bumper on the Amarok with a tow bracket, this position is used to attach the bracket and will not allow the T-Step bracket to locate correctly.

The first step (no pun intended) was to release the electrical cables from the tie down points on the chassis. Easy enough and there was plenty of length in the looms to safely and securely re-route them once the bracket was installed. There is only one bolt to remove and this is reused fitting the bracket. Now what in theory should be a simple and easy job actually was a bit of a sod. Holding the bracket up while trying to align the bracket and hole in the chassis while trying to insert a 18mm bolt with your hand bent backward while laying on your back evoked a lot of traditional Anglo Saxon cursing.
After an epic battle between me and the bolt. 40 minutes later I emerged the victor, take that you metric threaded stick of high tensile steel. The second bolt (supplied) was easy and dropped into place with flat washers and lock washer. Being from the IKB school of engineering I did also put a spot of Loctite on the thread.
Next was to mount the drop down assembly…

This was simple to do and again all the nuts, bolts and washers that are required are supplied in the kit. The design of the main mounting bracket does allow you to align the step slightly so it can be more to the side or more to the rear. I opted for it to be slightly more to the side so that when folded away it clears my auxiliary reversing light.
The last stage was to install the tread plate, again all the required hardware was supplied with the kit and it only took a couple of minutes to get it mounted and the nuts torqued down, again with the application of a spot of Loctite.
Heres a few photos showing the mounting…

I have given all the pivot points a light application of a dry lithium grease. I used a dry grease so it would not hold any road grit although the positioning when folded is quite high up and protected by a large mud flap. I will give the whole thing a spray of protective wax as well.
In the closed position, it’s not really too obvious and it doesn’t protrude past the bumper. The height to is quite good, I’m not going to catch it on anything. 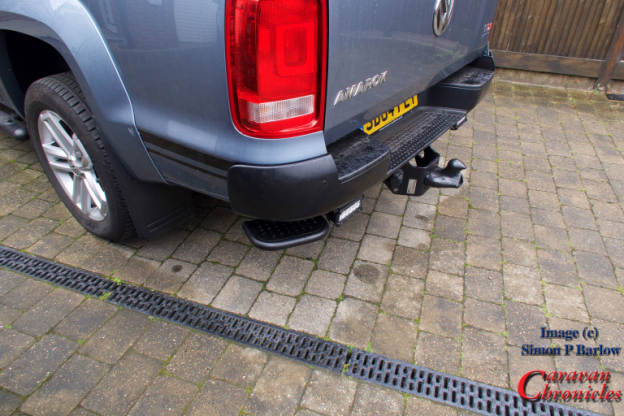 The operation is really easy, simply push down on it and it drops down and extends out giving you plenty of space to step onto it. 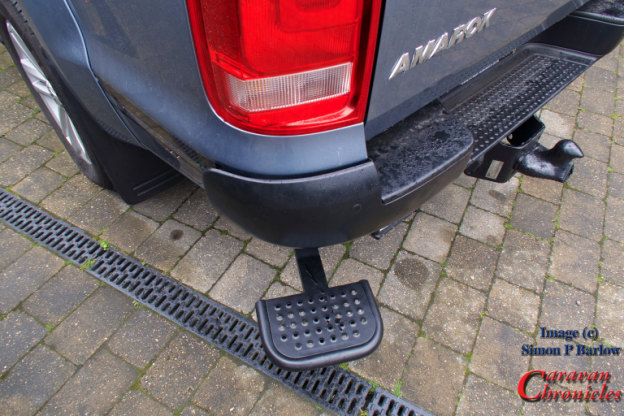 So what do I think of it?
Looking at the general construction, the steel work of the drop down unit is of a heavy enough gauge and all the edges are clean-cut, they haven’t been cheaply guillotined. The welds are neat and precise with little or no spatter and the coating seems to be of a durable quality. All the bolts supplied were marked 8.8 so they aren’t high tensile peanut butter. The main mounting bracket holes lined up with the holes on the  Amarok and it didn’t require any fudging to install.
Pegasus 4 x 4 gave me great service and I would have no hesitation in recommending them based on my experience with Andrew
Overall I’m very pleased with it, I can hop up onto the tailgate with the ease of a mountain goat (OK so that MIGHT be pushing it) and looking forward to it giving us long service.