An editorial from 4×4 Accessories Magazine.

The age-old adage, ‘if you’re going to do something, then do it right first time’ has been Pegasus 4×4’s unwritten motto ever since the company was formed by Alec Butt in the early ’90s. His first rate attention to detail when creating bespoke innovative products for pick-ups is still what stands Pegasus out from its competitors today.

Alec initially stumbled across the pick-up accessories market when importing the right-hand drive Mercedes C-Class from South Africa, as the same factory was assembling what was known as the Mitsubishi Colt pick-up. “I spotted how practical the pick-up could be – put a hard top or top-up cover on the back and you’ve got a huge versatile vehicle, more so than a normal estate car,” says Alec. “From a practical point of view if you have a dog that’s wet or dirty, it can be contained in that area as there’s a barrier between the canopy and pick-up itself.” Alec soon switched to importing pick-ups, buying in Mitsubishis from Holland while the exchange rate was favourable. Cleverly he decided to sell the vehicle on as a package (but at a cheaper price than a base level pick-up in a UK showroom) complete with side steps, hardtop, full leather and the same three-year manufacturer warranty. Funnily enough sales were brisk but once the exchange rate changed, the profit margin for importing pick-ups became less. But then a new idea developed. “I had a few customers ask if I would consider selling pick-up accessories and so I looked at the market and saw that there were one or two others doing this already, but there would be no harm in a little more competition. It was clear to me that we would make our products much better, regardless of cost, right from the start.” Alec set up a factory in Thailand (the world’s second biggest pick-up market) to exclusively produce Pegasus 4×4 own brand products to the company’s exacting standards and designs. Most importantly, the aim was to produce bespoke hard tops and top-up covers that looked like they were always meant to be for that particular vehicle and not an obvious aftermarket add-on. In doing so, each product is tailored to fit and today Bristol-based Pegasus 4×4 is a supplier of 4×4 Accessories UK to Nissan, Isuzu, Ford, Toyota, Volkswagen, SsangYong and more recently Mercedes-Benz. This means that a customer ordering their pick-up from any of these manufacturers can at the same time spec-up a Pegasus 4×4 hard top or top-up cover which can either be fitted at the dealership or at Pegasus’s HQ. 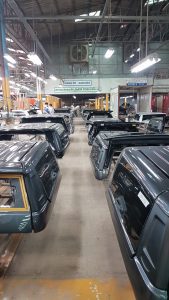 Alec incorporated some ingenious ideas when designing the Pegasus range, which differentiates the brand from its rivals. Each time a new pick-up is launched, the firm will buy one to be able to take measurements and create a perfect-fit hardtop or cover. However, some models like the  VW Amarok  have not been launched in Thailand, so great effort has been made to buy a rear bed of the Amarok and get it shipped out to Pegasus’s Thai factory. The whole process from design to actual bespoke product can take six months, especially as the components are not interchangeable. At least 50 per cent of Pegasus’s customers own dogs and so some canine-friendly design solutions were quickly established. Alec explains: “When the dog is in the back of the pick-up with the hard top in situ it can get very hot, but people don’t like to leave their side windows open for security reasons, or in case the dog gets stolen. Therefore our hard tops have a double-skin as well as a suspended roof lining which acts as another barrier so that heat cannot penetrate through.” To allow air to circulate, Alec redesigned the glass window between the hardtop and the back of the cab. “Most have as standard two pieces of glass that part at the front, but they stick and jam, so we designed a front window that can specifically slide 50 per cent one way or the other. It would be impossible for the dog to get out with this open, or for anyone to get at it.” Keeping dogs in mind, Pegasus’s supplied Bedrug is also a best seller. This fits over the pick-up load bed completely and stops the pet from scrambling about on the move, but also from trapping its paws in the gap between the bodywork and tailgate when this is down. This also further insulates the bed area giving a feel of an estate car.

Talking of tailgates, the latest ingenious and patented invention from Pegasus is its Tailgate Assist. “One of the biggest problems with a pick-up is that the tailgates are very heavy, so we devised a device that allows you to lift it and lower it with one finger,” says Alec. He’s right you know, I’ve tried it and it works. It involves fitting a spring at the that only lift up and hinge at a 45-degree angle, the Pegasus system can do this and elevate the cover to a horizontal position which is secured in place by locking pins, giving the advantage of being able to carry big items.

As the market for pick-ups continues to steadily grow not just here in Blighty but also in Europe and Australia, so does Pegasus 4×4’s customer base and distributors. With pick-up accessories, just like any other product, you get what you pay for and although Pegasus’s selective range of products are keenly priced, they are of the highest quality and offer value for money. What’s more, they are backed up by a three-year parts warranty. And you can’t say fairer than that. Pegasus 4×4 for the ultimate pick up 4×4 accessories UK and styling.

Pegasus is the registered Trade Mark and Brand name belonging to Alec Charles Prior Butt. Pegasus (no. 2302359) is registered with the Intellectual Property Office, Newport, South Wales, England. The registered Trade Mark is classified under Class 12 use and the copyright of this Trade Mark is not allowed to be used or associated with any similar products in any circumstances without the written consent of the owner. Hardtop / Tonneau / Canopy accessories for 4×4 pick up truck vehicles.